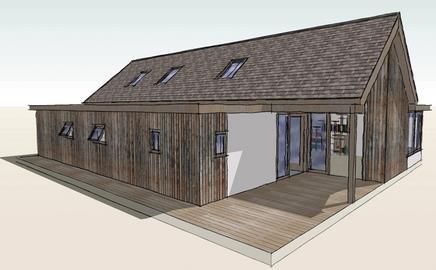 Why did you choose to use the Ecofab system?

Around two years ago, Bosvigo school in Cornwall wanted to take advantage of government funding that was available for developing early years facilities. They had brought an architect on board; however, the scheme hadn’t been followed through for various reasons. When they approached us, the window for securing funding was running out so we put together a proposal based on our modular system, which would just about make it possible.

The site also had access issues. There was no room to store materials and the building had to be constructed while the school was still occupied, which persuaded the school and myself to look at a prefabricated solution.

Another factor was that the building sits on the footprint of an existing store building. The floor of this is stepped down by 800mm, which meant any new building would have to be elevated to provide level access. The Ecofab system lent itself to this: we simply raised it up on the timber support posts.

Was it difficult to convince the school to go for a straw bale building?

Not really. One of the governors was a retired architect who took some persuading, but generally they were very receptive and considering the alternative – a portable building – it was an attractive option.

Sustainability is a key issue of the Ecofab system. How have you carried this through into other aspects of the design?

As a practice we always try to specify locally sourced materials. The main elevations of the building are clad using tongue-and-groove secoya from local forests and lime render applied onto a stainless steel mesh.

For the pitched roofs I originally wanted to specify locally grown western red cedar shingle but the building is in a conservation area and the planning officer wouldn’t allow it. Instead we have gone for slate. Normally we would go for a locally quarried stone but because of cost and availability this wasn’t possible. We’ve used one imported from Portugal which matches the local variety as closely as possible.

On the flat sections of roof we have gone for sedum to slow rainwater run-off and provide attenuation.

Heating is provided by a Baxi air-source heat pump that serves an underfloor heating system. A ground-source heat pump would have been too costly and difficult to install. If mechanical ventilation with heat recovery to heat the incoming air were possible on this project, I think we might have chosen that.

Was there any value engineering?

The interior designers wanted to use rubber flooring, a very sustainable product, throughout the interior. However, it cost £43/m2 and was way beyond the budget. Instead we agreed to compromise and just specified rubber in the main teaching areas and used low-cost materials like cork for the utility space, with carpet in parts of the creche and quarry tiles in the foyer area, which brought the overall average cost down. We also switched the specification of the window sills to local pine, dried in solar kilns, to reduce costs.

How much has the building cost?

The building is 100m2 internally and the total project cost, including a £5,000 contingency and fees, was £159,000. In general we have found that the Ecofab system is no more expensive than constructing a conventional building. However the specification is much higher. The thermal efficiency is miles ahead of a conventional structure. The SAP rating is 98, bearing in mind it has photovoltaic panels feeding the building. This doesn’t take into account that you are locking up tonnes of carbon in the building as well.

Are these buildings difficult to insure?

The schools have never come back to me and said they can’t get insurance for the building. When we use the system on houses we team up with a company called Build Zone who gives the building a 10-year structural warranty, which secures funding for mortgages and reassures the insurers.