9
Reducing heat loads: Testing the water at the University of Cambridge
Focus

Reducing heat loads: Testing the water at the University of Cambridge 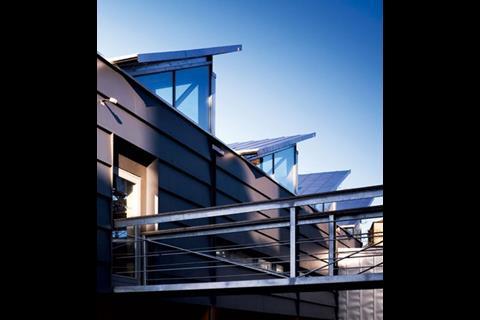 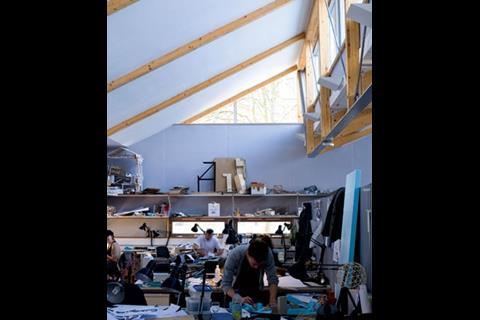 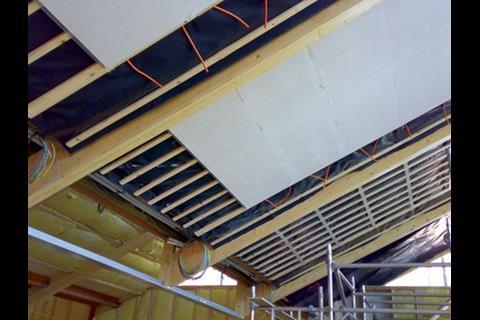 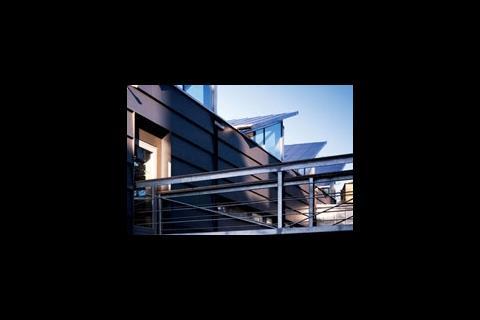 Sustainability and innovation - When the architectural department at the University of Cambridge demanded a sustainable, lightweight building for its students, the designers had to overcome the problem of overheating

How to get thermal mass into a lightweight building structure is one of those eternally interesting questions, says Meredith Bowles of Mole Architects.

It’s one he’s dedicated plenty of thought to recently and hopes, with a project just completed for the University of Cambridge, to have found an answer to.

The building in question is a new studio that has been completed as part of a £3m upgrade of the University of Cambridge’s department of architecture. “A requirement of the brief was that the building had to be as sustainable as possible and as a material timber is the most sustainable,” says Bowles.

Previous projects carried out by the practice included a number of housing schemes where Glulam timber frames had been used to keep the embodied energy of the building as low as possible. The studio is a scaled-up version of this. Beneath the distinctive saw-tooth roof, 7m-tall Glulam posts and 350mm-deep Glulam beams provide the main supporting structure. The trouble was that with the lightweight timber structure came the prospect of overheating. “It was the biggest area of concern,” says Bowles.

While designers of naturally ventilated, low-energy buildings can normally rely on the thermal mass of a building to iron out peaks in the internal temperature, this wasn’t going to be an option at the studio. Instead, the design team looked at the option of using water to provide the thermal mass.

Compared with masonry, water is even more adept at this role, given that it has the highest specific heat capacity of any substance. The challenge was how to integrate this with the structure and keep within the project’s tight budget.

Of course, water is easy to distribute with conventional pumps and pipes and the decision was taken that the ceiling would be the best place to hold it in order to provide the thermal mass. Compared with the floor, which was obscured by tables and chairs, and the walls, which would be used to display drawings and models, the ceiling had the largest exposed surface area – an important factor as the radiant cooling affect is dependent on the exposed surface area.

Philip Armitage of Max Fordham, the environmental engineer on the project, says the idea of circulating water through the ceiling surface developed. The water would be circulated from a water store during the day through the pipes in the ceiling where it would absorb heat from the space. At night, the space would be ventilated and the water cooled. It was calculated that at peak times by maintaining the ceiling at 18°C – high enough to prevent condensation forming – the room air temperature could be held at 24°C.

“The crucial question was how much water you would need to continuously circulate to make the plasterboard act like a concrete slab,” says Armitage. One of the things counting against the studio was that at peak times the space would be used by 120 undergraduates, which is roughly one person for every 2.5m2 or three to four times the density of a typical office. This would mean very high internal heat loads, compounded further by the studio being used for long hours, especially at the end of the summer term when deadlines loom.

After modelling the design, the answer to Armitage’s question came back as 50,000 litres, prompting a sharp intake of breath from the QS. “It looked interesting but wasn’t quite the right approach,” Armitage says.

To improve the cooling capacity and get the storage down, a second scheme was devised. Again water was circulated through the ceiling but at night it would be run across the outside surface of the stainless steel, saw-tooth roof where it could reject the heat it had absorbed during the day through conduction and evaporation. The theory was that the night sky would have a cooling effect and could be used until the temperature of the bulk storage tank was brought down.

“But it was a step too far for the client. They were nervous about such a novel approach and feared they wouldn’t get the performance out of it,” says Armitage.

A third version of the design was developed this time using a borehole to replace the storage tank. Water from the borehole would be circulated through the ceiling during the day and rejected into the ground. Modelling showed that the borehole would require a hole to be sunk to a depth of 300m.

The geology in Cambridge however restricted the depth to which a borehole could be drilled to about 45m. “We would have needed six or seven boreholes and these would have needed a minimum spacing of 5m so they didn’t interfere with each other,” says Armitage. “It was difficult to accommodate and, in the end, too expensive.”

A way of making the borehole more efficient at a shallower level was needed.

The answer was to install a heat pump that would increase the heat transfer and reduce the borehole length to 90m. Three 200mm-diameter, 30m-deep boreholes were used and connected to a heat pump that provided 7kW of cooling.

This moves away from the concept of simply providing thermal mass to an active cooling system. Armitage believes it is justifiable on the grounds that many renewables generate electricity directly and so it could be operated from a photovoltaic array or wind turbine in the future.

The ceiling design uses a modular system from Variotherm, designed for wall applications. This is a gypsum panel with grooves routed into the back where the multilayer composite pipe is held. Placing it on the ceiling was fairly simple, although the lighting and smoke detectors had to be carefully co-ordinated to avoid interfering with the pipework. Apart from that, it is a standard roof construction with the panels installed like normal plasterboard and the joints taped and skimmed before the ceiling was painted.

There was some confusion about who would procure the system at the beginning. As Armitage puts it: “Is it part of the mechanical system or part of the structure?”

In the end the main contractor bought the panels. It also bought the heat pump and ground loop as a specialist contract but the installation was carried out by the mechanical contractor. “This made the interface more difficult than it should have been and so in terms of procurement I think it would have been sensible to have it all under one roof,” says Armitage.

With the building completed and occupied, this summer will be the first test for the system. “I’m pleased with the concept and the outcome,” says Armitage. “But we do still have the heat pump.”

Ultimately it is the roof cooling scheme that he’d like to see implemented, where the only power consumed would be for the pumps circulating the water. “I’m thinking of using it on a competition but I’m not sure if it will work. It might have to wait another day.”

How room temperatures are controlled

Thermal mass is the ability of a surface to absorb or emit heat in response to a change in temperature of the air around it. This helps reduce peak air temperatures in rooms, cutting the energy needed to provide comfortable conditions. For the naturally ventilated studio building, the design team has had to meet targets for internal temperatures not exceeding 25°C for more than 3% of occupied hours or 28°C for more than 1%. The ceiling will achieve this by cooling the air that comes into contact with its surface and also by the radiant effect of the cool surface. Sensors will be used to control the temperature of the ceiling’s surface. In cooling mode it will drop as low as 18°C – any further and condensation may form on its surface – and in heating mode it can rise to 45°C. Modelling the building using IES software has demonstrated that this should be possible using the system installed.

The Think08 sustainability conference will be held at the ExCeL centre on 7 and 8 May. For more details go to www.think08.co.uk