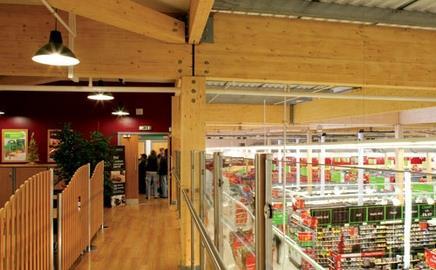 Think 08 will take place at the ExCeL centre London on 7-8 May. Here’s a taster of some of the firms that will be taking part.

The 34,000ft2 store, which was built on a brownfield site, marks the first stage in Asda’s energy-efficient build programme. The engineered timber frame uses wood supplied from certified and sustainable sources and B&K says it achieved a saving of 500 tonnes of steel and a reduction of 450 tonnes of carbon emissions. The glulam engineered frame provided the structure for the main store area and was also incorporated as an exposed timber feature in the main entrance canopy and the first floor restaurant area.

Solatube will be displaying its new Solar Star solar-powered ventilation system, which it says can draw more than 360 litres per second of stale air out from a building. The unit has a small, photovoltaic panel with a 10W motor to power a five-wing polymeric fan blade. The unit is cased in galvanized black powder-coated steel with a non-corrosive polymeric vent screen. Solatube says its seamless one-piece roof flashing ensures fast, hassle-free installations on virtually all UK roof types, flat or pitched.

ThyssenKrupp Aufzüge will be presenting its twin lift system, which involves two lift cars operating in a single lift shaft. The concept saves space by allowing the total number of shafts to be reduced while allowing the same handling capacity.

The system is suitable for new build and retrofit in buildings between 50m and 200m in height. Both lift cars are fitted with their own traction drive and travel above one another on the same rails. A control system allows passengers to enter their destination before getting into the lift. The controller assigns the call to the lift that will reach the destination more quickly. A safety programme ensures that the cars maintain a minimal clearance from one another.