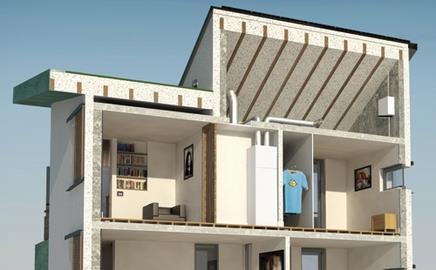 The prototype homes in BRE’s Innovation Park has been a revelation for the rest of the industry. But when are they moving into an estate near us?

A huge amount of time and effort has gone into the prototypes on the BRE Innovation Park, but are they just one-offs, or are there bigger lessons for the wider industry? Jaya Skandamooorthy, director of enterprise and innovation at BRE says these homes are just the beginning of a much longer process. The first stage is to put the lessons learned on the park into a BRE Trust information paper. This will contain a lot of data on the design and construction of the homes, including details of things that didn’t go well. This will be issued next January.

There are also plans for more homes at the Innovation Park. Barratt Homes has already started work on its “Green House”, the design of which was selected by the readers of the Daily Mail. This code level six home, which is built from aircrete blocks and precast concrete floors, will be open from the early part of next year.

According to Skandamoorthy, the next house after this will be themed around natural materials, and will be “an organic type house using natural materials, maybe built using craft skills”. The idea is to “work out how far a house built in this way could meet the levels of the code”.

The homes on the Innovation Park will be monitored to see whether the renewable and low carbon technologies are generating the power they are intended to.

The next stage is to get people to test the homes out by living in them. Skandamoorthy says this is to find out if people like the homes, and whether they are prepared to change the way they live to get the most out of the homes’ low energy features. “There is only so much you can do to make buildings sustainable,” he says. “The biggest impact on the environment is when we all start to change our behaviour and make different choices. We are very interested in seeing how people living in these houses will behave and how they will change their behaviour.”

BRE isn’t just sticking with the Innovation Park at its Watford site. It plans to roll out an innovation park at its Limerick site in Ireland, then innovation parks in Wales and Scotland. The idea behind these other parks is to address regional environmental agendas and requirements. But what of the companies that have spent so much time and money on the individual buildings at BRE?

Unsurprisingly, they all plan to take their schemes on to the wider industry.

Below we look at each company’s intentions …

Stewart Milne says it is developing a range of low-carbon house types based on Sigma technology and footprint that are designed for either brownfield, urban or rural settings. The designs are based on the home at BRE although homes for rural settings could be specified as two rather than four storey homes, and with different architectural finishes. The basic, underlying design principles will stay the same. The company wants to build what it describes as a “Sigma Village” either through English Partnerships Carbon Challenge competition or on private sites over the next 12 to 18 months.

Osborne homes are aimed at social housing providers, so keeping costs down is essential. The Osborne house was designed before the code came in, so its SIP panels are less thermally efficient than they could be, and are supplemented by additional insulation. Osborne plans on updating its SIP panel so it has the same thermal properties as the BRE home. It is working on a code level five two-home social housing scheme in Surrey with Raven Housing Association, but has no plans to go up to level six because of the cost of the renewable technologies that would be necessary.

Like the Hanson house, the Willmott Dixon system is panellised, which means it can be used for a wide variety of designs. Panels are up to 4m wide and 18m long so can fit into many structural grids and can be clad with a wide variety of materials. The system could theoretically go up to 10 storeys, although Willmott Dixon says it will stick to a maximum of five for now. It says there has been a lot of interest in Willmott Dixon’s prototype school at BRE, and four projects are “very interested” in using it. There is also a “good opportunity” to build a visitor centre using the system.

The Hanson design is about the development of its Quickbuild prefabricated masonry wall-panel system, rather than a one-off house. The aim is to encourage architects and housebuilders to come up with their own designs using the panel. Hanson will offer a range of brick types in a range of bonds, and it will be available in stone and other types of wall cladding materials. Hanson is also selling the BRE design to housebuilders as a complete package.

The Kingspan Lighthouse was conceived as a prototype to demonstrate that homes could be built to code level six. However, Kingspan has opted to go down a different route from the other companies at BRE by marketing the Lighthouse as a self-build package through its subsidiary Potton. Buyers can opt for a stripped-down version of the original or specify carbon-reducing technologies such as the solar panels. Potton plans to extend the range of designs next year, with a range of footprints including large family homes. Kingspan also says it will consider supplying housebuilders with level six homes.

Ecotech says it always intended to design a home that met high levels of the code, and that could marketed at a reasonable cost. It says the cost of its system works out at £99 a square foot, which is just over £1,000 per square metre for a code level four home. To up the rating to level five the homes would need more renewable technologies, and that would of course increase the cost. Ecotech says it is working with green electricity supplier Ecotricity who would use offsite power generation to take the Organics home up to level six. Ecotech is currently working on its first commercial scheme.