Route was ‘only viable’ one to build club’s new ground, contractor says

Mace has revealed more details of its decision to sign a construction management deal to build the new Spurs stadium – despite originally winning it under a fixed price.

The firm won the deal back in late 2015, having seen off a pitch from Multiplex with other firms interested in the job at the time including Laing O’Rourke.

In August, Mace admitted the job “evolved into a construction management contract” after reviewing the scheme with the club to find the “most appropriate way to deliver the stadium”.

In an update, the firm told Building the route was “the only viable” one at the time.

It added: “Given the wider economic uncertainty at the time we were negotiating to build the New Stadium, we believed that construction management was the only viable option for a project of this scale and complexity.”

Yesterday, Building reported that Tottenham’s chairman Daniel Levy last week told supporters the delay on the 62,000-seat ground was down to “several” contractors and admitted costs had “definitely risen”.

Cost-cutting measures the club has introduced include paring back its internal spend on items such as campaigns and marketing.

Levy also revealed the delay meant “much of the [stadium’s] external work has been brought forward from next summer”.

The club is due to give an update by the end of this month on the stadium’s progress with details expected of where it will play its one home league game next month, against Chelsea on 24 November. It is currently playing its home league and Champions League fixtures at Wembley. 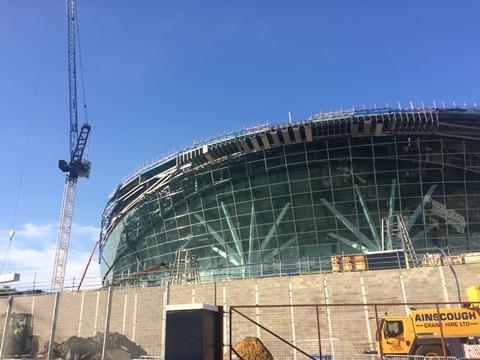 Work is continuing at the delayed site