Tottenham Hotspur has said that all of its upcoming home Champions League fixtures will now be played at Wembley stadium – with the club still unable to say when its new ground being built by Mace will open.

Its games against Barcelona, PSV Eindhoven and Inter Milan will be held at its temporary home at the national stadium, with the Inter Milan game taking place on 28 November.

The club also confirmed that its game against Manchester City, originally scheduled for 28 October, has been switched to the following night and will be played at Wembley.

The club faced a clash with an NFL game being played at Wembley on the date it was due to play the reigning Premier League champions.

In a statement this afternoon, Spurs chairman Daniel Levy said: “We are now being regularly updated on [the stadium’s] progress and as soon as we have confidence in our project managers’ and contractors’ ability to deliver against the revised schedule of works, we shall be able to issue dates for test events and the official opening game.

“We are facing many issues, but although disappointing, costly and frustrating, I am uncompromising in my determination to deliver something extraordinary to our fans.”

He added: “We are all focused on ensuring contractors deliver our new stadium in the shortest possible period of time and opening our stadium at the earliest opportunity. The consequences of not being able to open our new stadium on 15 September against Liverpool have been immense.”

He said the move back to Wembley – its home for the whole of last season – has meant the club has incurred “substantial additional costs, not least of which the need for alternative venue hire, along with the inconvenience for our fans and those of our opposition”.

Last month, Mace said the problems on Tottenham Hotspur’s late-running stadium, where four tower cranes are still up and running, were down to faulty wiring.

And Reynolds revealed that it only began work on the stadium’s cable net roof less than a year ago and it has still not been finished. “[A cable net roof] requires all of the structure to be completed in order to begin…The roof was always scheduled as one of the last activities and is now due to be substantially complete at the end of August.” 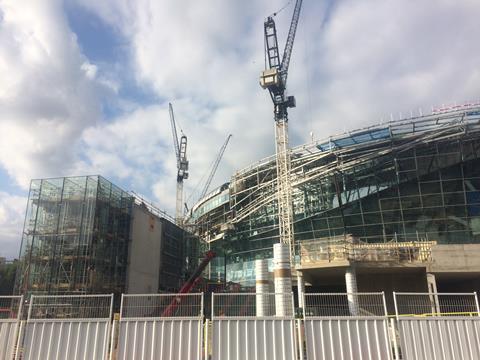 Four tower cranes are still at the north London site