22
Specialist Contractor of the Year
News

Specialist Contractor of the Year 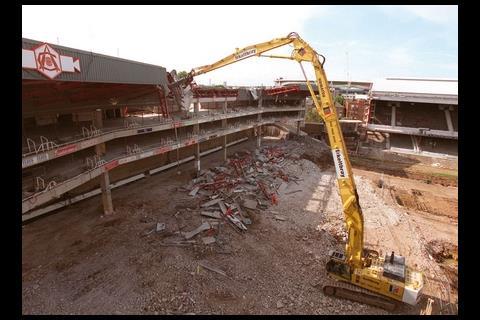 With growing emphasis on the regeneration of brownfield sites, construction is generally preceded by the destruction of the previous job. That’s why this year’s specialist is a demolition firm ...

It’s not often that a demolition firm takes this award. More often it’s an off-site fabricator that has teamed up with a cutting-edge architect, or an M&E firm, or a logistics outfit with a heavy-duty IT system. Well Keltbray has made it this year, partly on the strength of the projects it has undertaken, including a nuclear decommissioning scheme done by hand, and high-pressure jobs such as the bridge slide it carried out at the White City development during a four-day possession of the Hammersmith and City line. This included constructing the bridge deck and the widening of the train trough while the Central Line remained open. The firm is no slouch when it comes to sustainability either. It is converting half of its vehicle fleet to biofuel and uses crushers to instantly convert all the concrete it knocks down into material for piling landscaping and roads.

Anyone who’s been taking more than a cursory interest in the construction industry over the past few years will know that things haven’t been going so well for makers of envelope solutions, as cladders are known these days. Which puts the fact that Alumet’s turnover has doubled in the past three years into some context. One reason for this success is that it has proved adept at making the most of the latest trends in its industry, in particular partnering with key clients such as Kier, HBG, Miller and Taylor Woodrow.

This firm is flying the flag for the M&E sector, which is probably undergoing its most rapid evolutionary phase since the invention of air-conditioning. It’s not hard to see why it made the shortlist, given its rock-solid financial performance (turnover up 45% in the past three years) and the fact that it’s built up a 77% repeat customer base. But one thing that impressed the judges (who have listened to many firms complain about skills shortages while doing little about it) is that this firm is developing more than 50 apprentices and 212 trainees.

This aptly-named concrete specialist is growing like a freshly decanted genie: in the past year it has doubled the number of staff it employs and grown its turnover from £158m to £356m. Of course, such rapid expansion brings dangers of its own, as all the new employees have to be inculcated into the company culture and all the new clients have to be impressed, so it’s a sign of the firm’s management ability that its client satisfaction rating is running at better than 75%.

Prater started out as a mastic asphalt layer and evolved to become a total envelope provider – and one of the best of its breed, as a string of successful projects, from the Emirates stadium to Romford hospital demonstrate. The judges liked its development of pre-assembled structures and the in-house team dedicated to getting the most out of them. It is not unusual for Prater to install more than 1,000m2 of prefabricated panels in a single day ...

Well another year, another Building Awards shortlist, and another appearance by Yorkon, albeit not on the winners podium this time. Nevertheless, this York-based subsidiary of Shepherd continues to be Britain’s industry leader in off-site fabrication. Last year its production line turned out £25m of modular buildings for hospitals, schools, offices, shops and airports every one on time and to budget And, more importantly, it has invested money in finding ways of bringing more design flexibility to modular buildings. The result is fine buildings and clients who are effusive in their praise for “the Yorkon approach”.