This series of derelict terraces in the deprived Toxteth area of Liverpool had been earmarked for demolition but was saved by a public enquiry. Start-up Placefirst then began a methodical, house-by-house restoration, offering the 296 refurbished homes for social rent to the local community. The result is the revitalisation of an entire section of the city that forms the UK’s largest empty homes project. 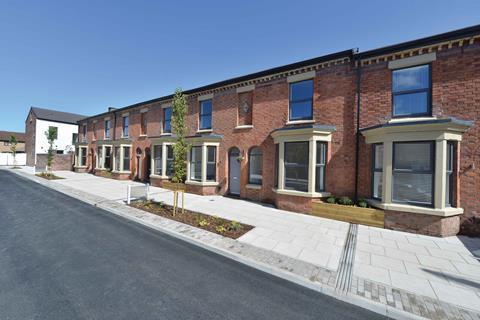 This renewal of one of London’s most splendid art deco town halls restores cherished original features while integrating valuable new services and spaces, for instance turning a former service lightwell into a covered courtyard that rationalises circulation. Local artisans have been central to the revival of decorative features across the entire building.

This grade II*-listed 1930s former HQ and factory’s conversion into 66 flats features a radical yet heritage-sensitive rooftop extension that houses 12 loft flats within a pitched, prefabricated timber truss and roof-cassette structure supported by existing beams. Elsewhere original art deco features such as the triple-height Crittall windows have been sumptuously restored.

Beyond the general cleaning and repair of the rich red brickwork and handsome stone dressings of the ornate classical facade, little has been changed externally in this baroque town hall. But inside, a labyrinthine warren of Edwardian accommodation has been rationalised – and a soaring new atrium and bridge provide a powerful metaphor for the link between new and old.

Sir James Pennethorne’s highly ornamental Victorian annexe block has been sensitively refurbished to provide new exhibition spaces and a magnificent agora-inspired lecture hall beside the sumptuously restored Senate Room bar. And the dramatic sequence of staircase “bridges” and exposed subterranean spaces that link this building to the original block, burrowing through the Royal Academy School, serve to unify and rejuvenate the entire campus.

The former BBC HQ’s “doughnut” footprint formed the opening credits to generations of TV programmes. Now the grade II-listed buildings have been redeveloped into a mixed-use scheme that subtly honours its prestigious broadcast heritage while providing a host of residential, commercial, hotel and leisure accommodation across its vast west London site.

This renovation of the world’s largest surviving glass structure – a grade I-listed building that ranks alongside the Taj Mahal and the Grand Canyon as a World Heritage Site – is a triumph of conservation prowess and technological and logistical ingenuity, including the meticulous individual replacement of 67,000 panes of 4mm glass.

This scheme offers an ingenious solution to revitalising retail buildings that are architecturally significant but commercially redundant. An ornate yet dilapidated red-brick Victorian emporium is beautifully renovated into a restaurant with offices above. The interiors combine painstaking restoration with raw and exposed original fabric, adding a stunning new rooftop oak structure.

Timber is not a material associated with corporate atriums, particularly when the atrium is in a monolithic, postmodernist office block. But this radical interior overhaul sees the material extended over a full 10 storeys to create a dynamic new lobby that forces redefinition of what a corporate atrium should be. The design transforms a once cavernous and forbidding interior into a vibrant rectilinear beehive.

Proving that conservation and innovation can go hand in hand, this spectacular refurbishment of one of Europe’s greatest neoclassical compositions has renovated the historic fabric of the grade I-listed Georgian building and inserted new shops and galleries, while relevelling the 66,000ft² courtyard to transform it into a stunning urban piazza.

This dynamic overhaul of a tightly hemmed-in urban block seeks to redefine how far a new intervention can project its own identity while remaining sympathetic to the spirit of what preceded it. A ramshackle brickwork assortment of utilitarian London back streets is given fresh unity and coherence by its careful consolidation into a new facade.